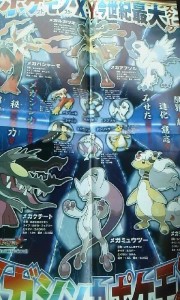 In the world of Pokemon (ポケモン), trainers raise their Pokemon and train them to become the best among the best. The trainers have a choice whether to evolve their Pokemon so as to make them even more powerful or let them stay as they are. In the region of Kalos (カロス地方), evolution takes a step futher with Mega Evolution (メガシンカ). Asgard Anime takes you on a Mega Evolution crash course with the latest Pokemon X (ポケットモンスターＸ) and Pokemon Y (ポケットモンスターＹ) revelations!

How does Mega Evolution differ from the regular Pokemon evolution? For starters, Mega Evolution occurs only when a Pokemon is qualified for this manner of evolution and has the necessary requirements, including the Mega Stone the Pokemon has to hold. Mega Evolution can only occurs during battle and will disappear after the fight and the Pokemon who have undergone Mega Evolution will have Mega attached to their names. So far, the Pokemon eligible for Mega Evolution are Absol (アブソル), Ampharos (デンリュウ), Blaziken (バシャーモ), Kangaskhan (ガルーラ ), Lucario (ルカリオ), Mawile (クチート) and Mewtwo (ミュウツー). When these Pokemon Mega Evolve, they gain abilities that make them even stronger.

So exactly how do the Pokemon undergo Mega Evolution? Check out the video brought to you by the official Pokemon Youtube Channel and don’t forget to grab your Torchic (アチャモ) that comes with a Mega Stone on October 12, 2013!