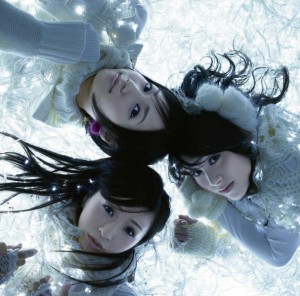 The song, entitled Mirai no Museum, was written especially for this Doraemon movie. The song’s theme is set around a museum that displays every secret gadget the world has to offer. Nobita no Himitsu Dougu Museum is directed by Yukiyo Teramoto (寺本 幸代) who has already worked on several Doraemon movies previously. This movie tells the story of Doraemon (ドラえもん) and the gang who are after the thief who stole Doraemon’s bell.

Made up of Yuka Kashino (樫野有香), Ayaka Nishiwaki (西脇綾香) and Ayano Omoto (大本彩乃), Perfume first made their local debut in 2001 and they gained their major label in 2005. By January 2012, Perfume has released 14 major label singles. Perfume mixeselectronica with their chosen genre of music which makes their group unique from every pop group in Japan. These girls from Hiroshima, Japan have come a long way and now they are expanding their reach into the rest of the world.