One Piece Film Z: Who’s Who Behind The Film And The Trailer

Published by SchoolGirlBlogger on April 25, 2012 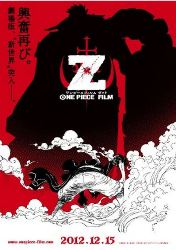 It’s just been announced that the famous pirate anime One Piece will be getting a new film set for December 15 this year. The motion picture, entitled “One Piece Film Z“, already has a teaser trailer (see below). The short trailer features Z (Zetto), the strongest enemy the Straw Hat pirate crew has ever faced.

The crew behind the One Piece Film Z has already been announced too. Eiichiro Oda (尾田 栄一郎), the creator of One Piece, will produce the film. Oda also designed Z himself. Broadcast writter and self-confessed One Piece fan, Osamu Suzuki will be writing the screenplay. “I’m a big fan of One Piece,” he said. “I got to create the story right after Fishman Island. The movie will take place in the New World, and it will be an exciting story.”

Nakata Yasutaka will again be providing the theme for One Piece, but this time on a bigger scale as his next One Piece project will be for the up-and-coming film. His song “Panoramic Experience” is featured on the One Piece Exhibition at Mori Arts Gallery located in Roppongi Hills.

Tatsuya Nagamine, who previously worked on One Piece: The Desert Princess and The Pirates, will again be directing One Piece Film Z. Masayuki Sato will take charge as the film’s animation director.

Check out the trailer and tell us what you think about it on the comments section below. One Piece Film Z will be opened together with the “Annihilation of Pirates” all over Japan.