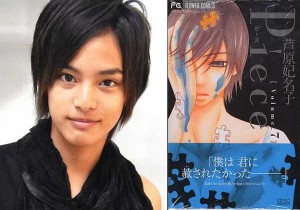 NYC member Yuma Nakayama (中山優馬) takes in the lead role of the live-action adaptation of Piece, a manga created by Hinako Ashihara (芦原 妃名子). This was announced on September 9, 2012 by Nippon Television Network (NTV). The live-action take on Piece is slated for the late-night schedules.

In the television drama, Nakayama plays the part of the cool and collected college student, Narumi Hikaru. The manga was first published in Betsucomi in the year 2008 and with Shogakukan publishing the eight volume in June. Piece tells the story of a girl named Mizuho who has to dive back into her past to help the mother of her deceased high school friend into finding this friend’s unborn child.

Yuma Nakayama is a Japanese singer/actor. Together with Ryosuke Yamada (山田 涼介) and Yuri Chinen (知念 侑李), they formed the Jpop band NYC. Nakayama, 18, performs under the agency Johnny’s Entertainment and first made his debut under the boy band called B.I Shadow. If the surname Nakayama sounds familiar to you, Yuma Nakayama is the younger sibling of NKB48 member, Nana Nakayama who goes by the stage name of Nana Yamada.