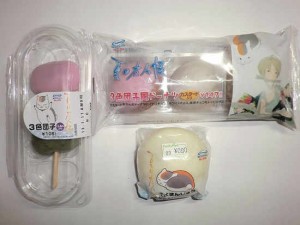 Japanese convenience store chain FamilyMart (ファミリーマート) certainly knows how to tickle the fancy out of anime and manga fans alike! The latest addition to the FamilyMart anime-inspired goodies is Natsume Yujin-Cho (夏目友人帳), otherwise known as Natsume’s Book of Friends.

Since January 8, FamilyMart has been offering Manju (饅頭), Dango (団子) in three different colors and even doughnuts. A Manju is one of the most popular sweets in Japan. It is a bun with a filling made out of red bean paste. A Dango, on the other hand, is the Japanese take on the dumpling. It is made from rice flour and is served skewered in a stick and can come in different colors.

Natsume Yujin-Cho first began as a manga series created by Midorikawa Yuki (緑川ゆき). The manga’s success eventually spawned four anime series, all of which have a total of 13 episodes. Natsume Yujin-Cho tells the story of Natsume Takashi (夏目 貴志), a young orphan who has the ability to see spirits. On the death of his grandmother, Natsume Reiko (夏目 レイコ), Natsume inherits a book that contains the spirits she had overpowered into servitude.

Did we mention that the Natsume Yujin-Cho food items are available for a limited time only? Head on down to the nearest FamilyMart in your area before they’re gone!