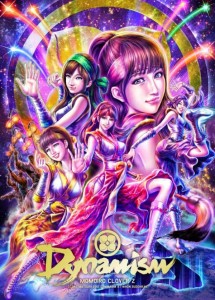 Born on September 21, 1961 in Tokyo, Japan, Tetsuo Hara first came out in the manga industry as an assistant to Yoshihiro Takahashi (高橋義廣), a manga artist known for his work in FANG. While Hara’s skills in drawing improved, his amateur entry earned him the first prize of the 33rd Fresh Jump award for his manga entitled Super Challenger. The 51-year-old manga artist slowly rose to fame with his work on Iron Don Quixote on Weekly Shonen Jump, but it was his partnership with Buronson (武論尊) on Fist of the North Star that cemented his name forever in the world of anime and manga. Hara developed a tight friendship with fellow manga artist, Tsukasa Hojo (北条 司) who brought us City Hunter (シティーハンター) and Cat’s Eye (キャッツ アイ).

Hara took on the art for of the DVD/Blu-Ray set’s front cover, -Dynamism-, while flower artist/costume designer, to4∞★Toshiko, took on the back cover with -Girl’s Imagination-.

The Momoiro Clover Z Limited Edition DVD/Blu-Ray set will be released on February 27, 2013. If you want to see more and learn more of Tetsuo Hara, don’t forget to drop by his official website, www.haratetsuo.com.