Macross Frontier Gets Comical Namco Make Over For Special Lottery 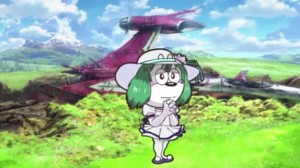 The latest Macross Frontier (マクロスF) offering, Macross Frontier the Movie 30th d Shudisuta b BOX, is coming in a Blu-ray box set and Namco Amusement joins in on the celebration with a special Macross Frontier lottery. Umaibo’s (うまい棒) adorable mascot dresses up as Ranka Lee (ランカ・リー), Alto Saotome (早乙女アルト) as well as a very shapely Sheryl Nome (シェリル・ノーム) in a 2-minute promotional video.

The special lottery gives you a chance to snag the Macross Frontier the Movie 30th d Shudisuta b BOX Blu-ray set topped off with autographs from none other than Aya Endo (遠藤 綾) and Megumi Nakajima (中島 愛) – the voice actresses of Sheryl Nome and Ranka Lee respectively. Other prizes include Ichiban Kuji Premium figures, posters, cushions and jigsaw puzzles just to name a few. The lottery began on February 21 and will end on March 16 so join the lottery now!

Macross Frontier is more than just a mecha/science-fiction anime. Riddled with drama, the series highlights the lives of Sheryl Nome, Ranka Lee and Alto Saotome and together, they face off against alien threats to the human colony.

Do you think you can keep a straight face while watching this video? Test it out by watching it below! Join the lottery and you just might take home the grand prize! Visit Namco’s official website for more information.