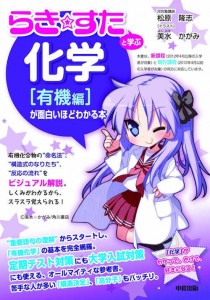 If chemistry isn’t your thing but being an otaku is, you’re in luck because Lucky Star (らき☆すた) is here to teach you chemistry!

Lucky Star is back with their second chemistry book and this time, the Lucky Star girls, together with sensei Takashi Matsubara, will be dealing with organic chemistry.

As previously mentioned, this is Lucky Star’s second chemistry book. The first book was about basic chemistry. Yoshimizu provides the numerous illustrations of the book which will certainly get your interest which he himself drew, including the back cover. Now things went up a level higher with organic chemistry. Stay tuned for more information because who knows, Lucky Star might be teaching masteral subjects next.