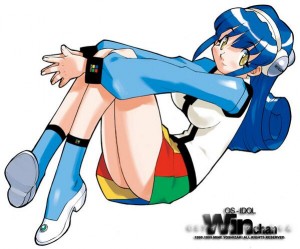 Windows XP had served a long and healthy life for us Windows users and with its support finally ended, we say our final adieu to the perhaps the world’s widely used operating system. Among the mourners of Windows XP’s end is Sgt. Frog (ケロロ軍曹) creator, Mine Yoshizaki (吉崎 観音). Yoshizaki has posted a series of OS-IDOL art over at Twitter.

Mine Yoshizaki designed and created OS-IDOL Win-chan. Win-chan is depicted as a bishoujo character with waving blue hair, tight clothes, signature silver headphones and a bust that can rival Super Sonico’s. Win-chan has appeared in numerous art as well as in the form of figures. To name a few, one is in a bikini with a pose which is reminiscent to that of Felicia from Darkstalkers while the other is fully clothed with a look of pure surprise on her face.

The Windows XP was introduced in 2001 and was known for its redesigned graphical user interfaces. Even with the release of Windows 7, Windows XP was still everyone’s OS of choice. Its iconic wallpaper, Bliss, is an unedited photo taken by Charles O’rear of a blue sky and sloping hill located in the north of San Francisco.

Need more Win-chan photos? Click here to visit Mine Yoshizaki’s Twitter page. The Win-chan photos are easy to spot as they are all posted on the same day of April 10. Don’t forget to follow him!