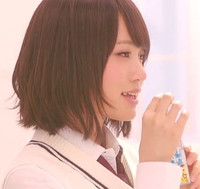 Japan’s famous girl band receives the ire of Japanese viewers because of their latest commercial.

From the official annnouncement made by the Broadcasting Ethics & Program Improvement Organization (BPO), the commercial shows the members of AKB48 passing candy from one to another using their mouths. This mouth-to-mouth relay, with lip brushings that could hardly be escaped, alarmed the Japanese populace. Their complaints were summed up to three different points:

1. Children would most likely imitate what they see on television.

2. The commercial makes the members looks like they are playing with their food.

3. The mouth-to-mouth relay is unsanity and disgusting.

The AKB48 girls were as disturbed as the viewers when the commercial was filmed. “Usually we don’t get close to each other’s faces so we were quite nervous during the filming.” One of the members said. In 116 cases out of 196 that BPO has received were all connected to the said commercial.

The confection that the girls were promoting is called “Puccho”. A brand of Japanese soft candy, Puccho is produced by UHA Mikakuto Co. Ltd and has two types: the stick variety and the gummy type Puccho.

The most awaited anime version of AKB48 entitled “AKB0048”, which is based on the popular girl band, will air on April 29 and will definitely bounce the girls back up on top from this little vexation. The anime’s plot is about the girls being marked as terrorists but they fight back to protect their fans and citizens.

Check out the controversial video below and tell us what you think in the comments section below.