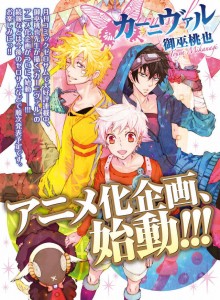 Karneval (カーニヴァル) readers has been teased since April with the news of an anime adaptation of the manga. The long wait is finally over as a limited edition copy of volume 10 has a bonus DVD which contains a trailer of the anime.

Karneval tells the story of Nai (无), a young boy who is so innocent, he often borders on being gullible. Nai is looking for someone who is important to him, his only problem is that his only clue is a lone bracelet. Gareki (花礫) is an anti-social, 15-year-old boy who survives by sneaking inside mansions and stealing. His sharp wits and talents help him with his theiving. Nai and Gareki met inside a mansion where they were set-up. Soon enough, they became wanted criminals by the military security operatives. Not long after, the have an enounter with Circus, the most powerful defense organization working for the government.

Also romanized as K∀RNEVAL, Touya Mikanagi’s manga first came out in August 28, 2007 and is still and ingoing series. Karneval currently has 10 volumes.

Fans certainly can’t wait for the anime version to come out. Will Nai ever find the person he is looking for? Will Gareki turn a new leaf? Who is Karoku (嘉禄)? Stay tuned for more news on the anime adaptation of Karneval!