Kanehara Takumi – From Hosting To Drawing Up A Storm Manga Style 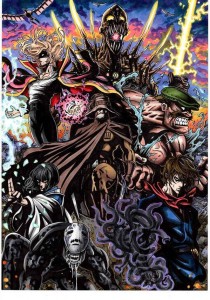 The Avengers of Ghibli by Kanehara Takumi

Kanehara Takumi (金原たくみ) turned over a new career leaf from being a Japanese host to a way awesome manga artist and what better way to celebrate his monumental career shift than to receive an award! Shonen Jump has celebrated his magnificent talent and endowed him with the Shonen Jump Treasure New Manga Award. You may be wondering as to why he quit his job as a host and it certainly isn’t television shows he used to host.

In Japan, there exists a night life business Hostess clubs. These clubs cater to customers who are seeking companionship and conversations over a few drinks. If a hostess clubs are for the men, host clubs are for women. Kanehara, who once worked at a host club as a host in Hokkaido, decided to turn his back on his hosting career and is warmly received by the world of manga.

Kanehara first tried out for a manga shot in Shonen Jump in June of 2012 but received an honorable mention only. 2013 is Kanehara’s year and he is part of the lucky recipients of the Treasure New Manga award. This self-taught artist has not only has power in drawing but in coloring as well. While most of his Twitter posts are illustrations inspired by Studio Ghibli, he also has original characters and even One Piece (ワンピース), Shingeki no Kyojin (進撃の巨人) and Hunter X Hunter (ハンター×ハンター) fan art!

Check out his Twitter page for a good dose of incredibly beautiful art and don’t forget to follow him!

Credits all go to Kanehara Takumi for his art that appeared on this article.