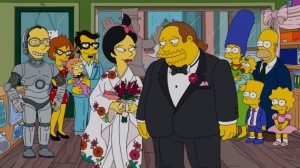 According to FOX, Episode 10 of Season 25 highlights Jeffrey Albertson, Springfield’s very own Comic Book Guy. While he worries that his comic books are nothing without someone to share it with, a Japanese girl named Kumiko. Much to the Comic Book Guy’s luck, Kumiko is a mangaka who is working on an autobiographical manga. This episode goes by the title of Married to the Blob. 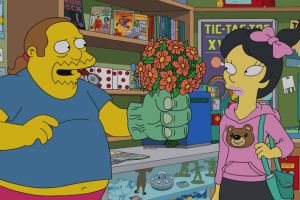 Now what’s a comic book episode without the legendary comic book writer Stan Lee? That’s right, Marvel’s very own Stan Lee will make yet another appearance in this awaited The Simpsons episode, making this his second Simpsons television cameo. Instead of showing up as his own Simpson-fied self, Stan Lee lends his voice to the owner of The Android’s Dungeons & Baseball Card Shop.

Married to the Blob will be aired on January 12, 2014 on FOX. More episode stills can be viewed over at Comics Continuum.