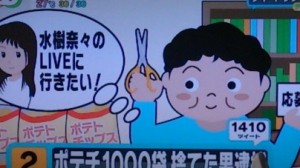 On June 10, 2014, it was reported that a 25-year-old office worker named Kazuki Fukumoto was arrested under the grounds of an illegal dumping of potato chips in Kobe and Akashi City in Japan. According to police reports, Fukumoto wished to collect stamps to enter in the Nana Mizuki (水樹 奈々) concert ticket contest hosted by Calbee thus leading him to dump 1000(!) bags of potato chips between May 4 and May 23. The amount of the dumped chips has reached a whopping 500 pounds! Now, this bit of news has reached Nana Mizuki herself and how do you suppose the singer/voice actress feels?

Mizuki has released an official statement on the incident last Tuesday saying that she is “deeply saddened by the event”. In connection to which is the complete and total waste the event has lead to. Mizuki took the opportunity to promote her firm belief in the Marugomi.

The Marugomi is a project that aims to unite the people in Japan at the exact same time in the very same day in cleaning and picking up of the trash around them. Mizuki has fondly said that the Marugomi is a fun way to protect and clean the environment.

The Nana Mizuki contest closed at the end of May while the concert is scheduled on August 3, 2014. Winners of the contest will get 10 tickets as well as backstage passes. Mizuki does not want to see another incident like this to happen ever again.