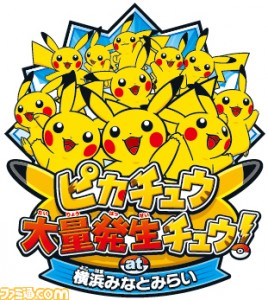 The next best thing to a zombie apocalypse just might be this. Get ready to have a cuteness overload as a huge number of ultra huggable Pikachus (ピカチュウ) from the world famous Nintendo franchise Pokemon (ポケットモンスター) make their way toward Yokohama City for Pikachu Outbreak! at Yokohama Minatomira (ピカチュウ大量発生チュウ)!

Scheduled on August 9 until the 17th, 1000 adorable Pikachus will be weaving in and out of Yokohama City to promote the landmarks Yokohama City is famous for, namely the MARK IS Minatomirai, Pacifico Yokohama, Yokohama Red Brick Warehouse, Yokohama Cosmo World, and the Yokohama Landmark Tower just to name a few. To make this event even more memorable, visitors can get limited edition goodies such as Pikachu Sunvisors, Pikachu TCG cards and a Pikachu Rookie Pokemon Tretta!

Each Yokohama landmark mentioned above and more will host separate events which are unique from one another. Here’s a quick guide on those events:

The Yokohama Landmark Tower will hold two separate events namely Pikachu’s Exciting Summer Vacation! in LANDMARK and Pikachu Centre Summer Festival in Landmark Hall. The latter event will have a kids carnival as well as a Pokemon Center to fill in your collectible needs while the prior event will host a Pikachu Smile School and even a video show! Check out this quick promotional video below and book a flight to Yokohama, Japan for this way cool Pokemon event!