Gunpla-Yaki Udon Makes A Come Back At The Gundam Cafe 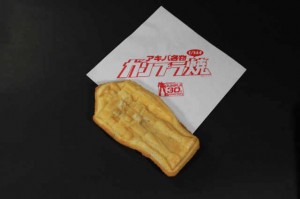 The Gundam Cafe welcomes back the Udon flavored Gunpla-Yaki in celebration of the Gundam SEED & SEED Destiny Fair on April 3, 2013. This special Gunpla-Yaki breaks the tradition of the sweet dessert the Japanese come to know and love and still come out as highly delicious. The Udon flavor was based on Andrew Waltfield from the Gundam SEED & SEED Destiny series who was eating away at a bowl of Kitsune Udon from the anime.

Udon flavored Gunpla-Yakis are available starting on April 3 until May 29, 2013 for only 200 JPY (2.12 USD) each.For more information, please visit the official Gundam Cafe website at g-cafe.jp.