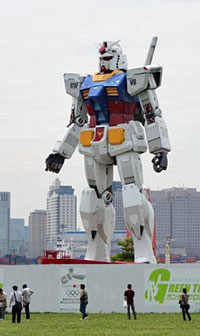 It originally stood in Tokyo bay on the island of Odaiba last Summer, where it attracted over 4 million visitors, nearly three times the expected amount. More details about the exhibit and other related events are to be announced end of March.

Ultimately there are plans for the statue to be permanently sited next to the Bandai Hobby Center in Shizuoka, which is the factory that makes Bandai’s Gundam model kits.