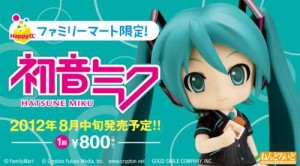 Japanese convenience store chain Family Mart (ファミリーマート) is holding a lottery called the Hatsune Miku Happy Summer Kuji. The prizes have been recently announced and they are more than enough to make a Vocaloid fan go wild. 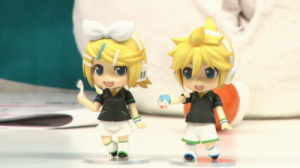 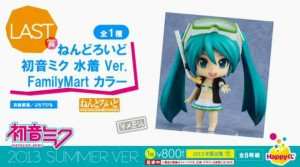 F Prize is a simple, stationary set with three different designs done by Miyuki Harada, KEI and Putidevil respectively; G Prize is a tote bag set that comes with two pin badges; H Prize is Hatsune Miku GraFig; Last but definitely not the least is the Last Prize category which features a Hatsune Miku Mizugi Nendoroid in the colors of Family Mart. If the prizes are already tempting you, head on down to the nearest Family Mart and you just might be lucky enough to win any of these goodies. You only need 800 JPY (7.87 USD) to enter in this lottery! Click here to see more photos of the prizes.