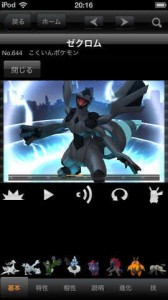 It’s every Pokemon fan’s dream come true to own a spankin’ new Pokedex. While a lot of toy Pokedex models brought to us by Nintendo are available, Nintendo is now extending their reach and has brought the Pokedex to Apple systems. The Pokedex For iOS has been released in Japan and it has cool features, among them 3D models similar to that offered in Pokemon 3D on the Nintendo DS. And we don’t want to miss you out on the another feature that it offers 6 different languages.

Whether it’s the game or the Manga, or the Anime, or even the Trading Card Game (TCG) the Pokedex has never changed. It is the most important tool a Pokemon trainer needs in order for him/her to complete the whole journey and become the best in the world. The Pokedex is an electronic encyclopedia that provides each trainers the necessary information they need. In the second episode of Pokemon, Ash’s Pokedex called “Dexter” introduced itself and explains its purpose.

“I’m Dexter, a Pokedex programmed by Professor Oak for Pokemon Trainer Ash Ketchum of the town of Pallet. My function is to provide Ash with information and advice regarding Pokemon and their training. If lost or stolen, I cannot be replaced.”

While the Pokedex For iOS won’t exactly be Dexter, it is sure to provide you with all your Pokemon information needs. Since the Pokedex varies per region, so does the app. The basic application covers the Unova region and is priced at 170 JPY (2 USD). The other regions including Kanto, Johto, Hoenn and Sinnoh will each cost 500 JPY (6 USD).