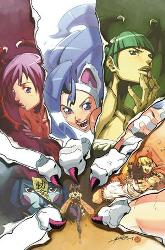 After Street Fighter X Tekken was completed, Capcom confirmed that they began to working on another great fighting game franchise after so many years. The Darkstalkers is a video game series that was first released in 1994 with a unique goth/horror theme. The last Darkstalkers installment was Darkstalkers 3 and was released in 1997. The games that came after the said title were more compilations and cross-overs rather than a continuation of the video game series.

Rumors have been flying since the news that Capcom has been working on Darkstalkers 4. One such rumor is that Yoshinori Ono is leading the Darkstalkers 4 project and that he is using a similar engine that was used in Street Fighter X Tekken. However, no announcements have been made on Capcom’s latest project or the release date of Street Fighter X Tekken.

Although Capcom vehemently refuses to comment on the rumors and speculations circulating Darkstalkers 4, it is undeniable that Darkstalker fans have been waiting for more than a decade and are on their toes for the newest chapter of the Darkstalkers game.

Since work is still underway for Darkstalkers 4, fans can mash buttons on Ultimate Marvel VS Capcom 3 with playable Darkstalker characters such as Morrigan, Hsien-Ko and Felicia.