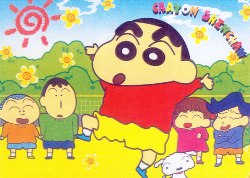 Crayon Shin-Chan returns to North American thanks to One Peace Books.

Crayon Shin-Chan tells the comedic story of 5-year-old Shinnosuke Nohara also known as “Shin-Chan” and his family. The manga began in 1990 with a total of 50 volumes and the anime adaptation of the series has been released since 1992.

Crayon Shin-Chan’s humor may not be to everyone’s liking; the manga and anime shows Shin-chan as a crude but lovable kindergartener. Although the brand of humor of the title can be silly and harmless such as children’s jokes, it more than often touches on mature humor that only adults can appreciate. Shin-Chan’s blunt honesty is also a source of good laughs.

The publishing house confirmed a listing featured on Amazon which is in four “three-in-one” compilations priced at $12.95 each.

The original author of Crayon Shin-Chan, Yoshito Usui, died from a hiking accident in Mount Arafune on September 12, 2009. Futabasha, the Japanese publishers of the manga, wished to end the series with his death but decided to continue producing Shin-Chan after manuscripts were found, thus extending the series on the manga shelves until March of 2010.

Depressed? Bored? Had a bad day? Grab Crayon Shin-Chan on DVD. Shin-Chan’s different takes on comedy never fails to get people laughing their heads off.