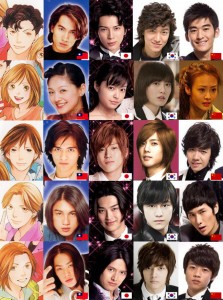 Yoko Kamio (神尾 葉子) must be so proud of her monumental work, Hana Yori Dango (花より男子). Her manga has inspired not only spawned an anime series out of it but also four(!) live action versions all hailing from East Asia namely Taiwan’s Meteor Garden (流星花園), South Korea’s Boys Over Flowers (꽃보다 남자), Japan’s Hana Yori Dango and China’s Meteor Shower (流星雨)! What’s going to happen if America does its take on it?

Six months ago, a Kickstarter Campaign was made by Wazego Collective with the hopes of raising funds for an American version of Hana Yori Dango. Unfortunately, the campaign failed as they only collected 1,252 USD out of their 100,000 USD target. Just when Wazego Collective was down, Willkinn Media came and picked them up and filming began on November. The American take, now renamed as Boys Over Friends, has released a short trailer which you can see below.

In the US version of Boys Over Flowers, Tsukushi Makino (牧野 つくし) has been transformed into a dancer named Zoey Taylor. Portrayed by Dawn Morrow, Zoey attains a full scholarship in Ellison University and runs into Liam Montgomery, Tsukasa Domyouji’s (道明寺 司 ) American counterpart. Montgomery, filled in by Joseph Almani, leads the F4 – a group of 4 notorious boys who terrorized the school and are backed by their good looks and immense wealth.

How do you think will this turn out to be? Share your thoughts on the comments section below!

Image credits go to Minsarang over at WordPress~