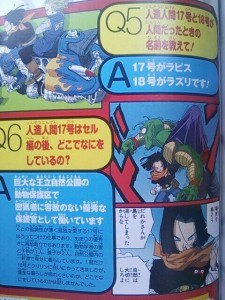 If you’ve been a long time fan of the Dragon Ball (ドラゴンボール), you probably remember how if felt when the Androids (人造人間) were introduced. Dragon Ball creator Akira Toriyama (鳥山 明) has answered 5 questions in a Q&A and what certainly got the fans hooked is that after how many years, Toriyama has finally revealed the names of Androids 17 (人造人間１７号) and 18 (人造人間１８号).

Android 17 was born as Lapis (ラピス). On the other hand, his twin sister, Android 18 was born as Lazuli (ラズリ). The twins were delinquents discovered and kidnapped by Dr. Gero (ドクター・ゲロ) in order to use in his experiments which resulted in creating a half-human, half-cyborg creation. 17 and 18, together with the other androids including Android 16 (人造人間１６号), Android 19 (人造人間１９号) and Cell (セル), were created for the purpose of reviving and fighting for the Red Ribbon Army (レッドリボン軍) which was initially defeated by Son Goku (孫 悟空) as a child. Androids 16, 19 and Cell were all defeated by the Z Warriors and Android 18 became Krillin’s (クリリン) happily wedded wife and mother to Marron (マーロン).

Surprisingly, Toriyama also revealed that Android 17 worked as a park ranger in a nature reserve after the cell saga. To top things off, 17 is happily married to a zoologist with two adopted children of their own. All’s well that ends well!