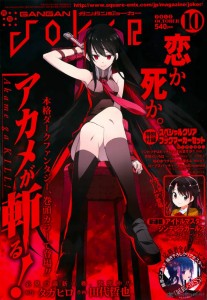 If hardcore action is your thing, then you’ll like Akame ga Kill! (アカメが斬る!). This shounen manga, known for its brutal action scenes, is getting an anime adaptation and the voice acting cast has already been announced! TOHO Animation has uploaded the 30 second clip of the preview in their official Youtube channel and has currently garnered more than 20,000 views.

Akame Ga Kill tells the story of Tatsumi (タツミ) who goes on an adventure to the Capital to help bring monetary aid to his village. Luck wasn’t on his side as Tatsumi was robbed by a woman. A girl named Aria comes to his aid by giving him a place to stay. By night fall, Aria’s place has been attacked by the Night Raid and one of the assassins reveal that Aria kidnaps and tortures villagers for fun which leads to Tatsumi killing Aria himself. The Night Raid sees potential in Tatsumi and takes him in.

Akame Ga Kill! is another great anime title to watch out for in July. We have the preview below for your viewing pleasure.