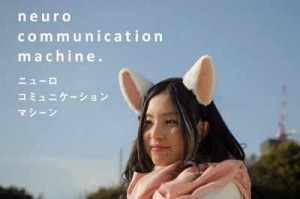 Some people would frown upon otakus who wear cat ears on a regular day. But not anymore. Say hello to the Necomimi.

How does the Necomimi actually work? Electrical impulses from the brain moved thanks to neurons. Necomimi Neurowear captures these impulses through the forehead sensor. The brainwave data is then collected and interpreted via the NeuroSky’s Attention and Meditation algorithms. With that said, the Necomimi displays the users brain activity and will show what the user is feeling through the simple movements.

Worldwide selling and shipment for the Necomimi is steadily getting its foothold. Crunchyroll News Reporter SailorBee gave the Necomimi a try and she made not only a video about it but she wrote a blog as well, saying “These things are just too cool. Once I put them on, I did not want to take them off.”

Get in on the latest otaku trend! Grab your Necomimi ears from !

Check out this video below and see how the Necomimi cat ears work.

I want a pair lol – where can I get them?

Now available from your friendly neighbourhood Amazon (find them here). Low stocks though!

They took 5,000 pairs of these to the Nico Nico Chōkaigi convention – they sold out and had to quickly get more stock in 🙂