Talkative, lively, quick-witted. Leshem Aedrel Bona is one of the cosplayers in Cagayan de Oro City, Philippines who is highly praised for his talent in making armored cosplay as well as weapons. He is a versatile cosplayer who can become a ruthless assassin to a fair damsel in a snap. Shem takes time off from his busy schedule to talk to us with his in this Asgard interview!

Asgard: Tell us how your cosplay life began.

Leshem: It started way back 2 years 11 months and 27 days ago… Well yeah, that was during TorCH 1*. I got fascinated with the event and yes, I already had the interest to cosplay but I didn’t know that there was really a community here. A month later I officially started joining costrips for fun then lately I just had my official debut. 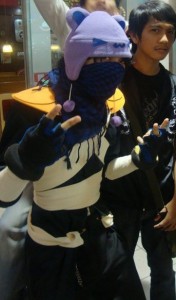 A: How did you find out about CDOtaku**?

L: GOOGLE linked me to CDOtaku! I was a member of CDOtaku way back march 2008 but I dont particularly join threads and conversations. It’s only either I read and leave it.

A: Going back to your first cosplay event, who did you go as and why?

L: Hei Shengshun [BK-201] from Darker than Black. Why? To put it bluntly, I found him as a splitting image of me. And yeah, magkapreha rin yung attitudes namin (our attitudes are nearly the same).

A: Since then, how many cosplay events have you attended?

L: In Cagayan de Oro, probably 6 major events and 4 minor ones while in Davao, 3 events.

A: And how many characters have you cosplayed in total?

L: 12… Wait, lesser than that since they are all incomplete. About 7 and two of them are fashion styles. 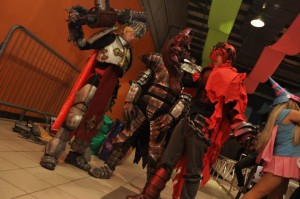 A: Do you have a certain cosplay style that you personally perfer? 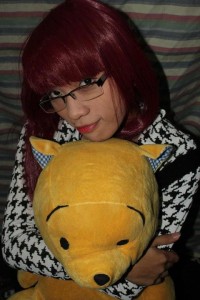 A: You’re hailed as one of the best armor makers in the Cagayan de Oro Otaku community. When did your passion for armor making began?

L: What best? I’m only a student you know! Anyway, it has gone way back since my childhood. I used to make box paper costumes way back then and I didn’t even know that was already an element of cosplaying.

A: What was your first cosplay armor and how long did it take for you to finish it?

L: First armor cosplay was a lame royal guard cosplay. Took me about a week to make it.

A: Has your armor making prowess improved since your first armor? What techniques did you learn in the process?

L: Well to begin with, the first armor was way back last May. So yeah, the only problem I had with that armor is the availability of resources; there are lots of materials that this city lacks so basically yeah, yun medyo pangit siya (they don’t look that good) but the techniques I put into the costume were the basics so that I can master them all easily and faster. “Mastering the basics is the key” as what my mentor said.

A: How long does it take for your to make armors nowadays?

A: How many armors have you made so far? 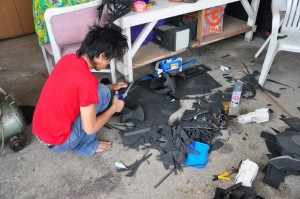 Leshem working on an armor.

L: Others wearing my crafts. I find it more gratifying than me wearing my own crafts. Gratifying and satisfactory.

A: TorCH 3 is just a few days away. Will you be joining and would care to tell us who your going as or would you keep your character a secret?

L: Yes and [it’s a] secret since i dont want to spoil the fun!

A: Any cosplay plans for the future?

L: Yes but it’s still tentative coz we dont know what the future holds. I prefer hoping for my future rather than forcing it. 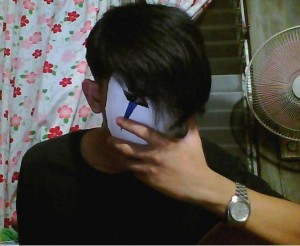 Leshem with his Hei mask.

A: Do you have any otaku related hobbies?

L: Reading manga, watching anime… Well the common ones actually! And then playing Japanese inspired games to give me ideas for future cosplays.

A: What do you have to say for those people who are too shy to cosplay?

L: Cosplay can be a good treatment to cure that shyness! A little step forward makes a long mile. Well that is what I think of it anyway since it worked for me. I used to be a shy dude before; I barely talked to others.

A: What is your favorite anime of all time?

L: The old ones of course, and yeah, Onegai Teacher!

**CDOtaku – An online community for otakus based in Cagayan de Oro City, Philippines

I’m looking for a costume or armor maker. Could it be possible to contact this guy? (thru mobile?). I’m from Cebu city by the way.

I don’t think he would give out his personal number to just anyone but I believe can reach him through this Facebook account: