The couple that cosplays together, stays together. Love birds Rem Adelynne Roca (Hoshiko Hikari) and Kazuo Ryuhei are long time cosplayers from Cagayan de Oro City, Philippines and are still making the fans scream in delight over their couple cosplays. They take a few minutes off their time to talk to Asgard about couple cosplays and everything in between. 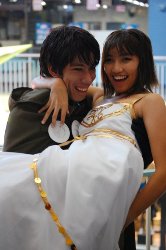 Asgard: anime, cosplaying and manga is something you two share. tell us how you two met.

Kazuo Ryuhei: We saw each other at a cosplay event in SM, the first cosplay ever held in SM, though we never got to talk to each other. Rem went as Misa Amane from Deathnote and I went as Uryuu Ishida. Then had some online encounters via the CDOtaku forums. The next time we met again was a forum eyeball event.

Rem Adelynne: I met Kazuo at SM cosplay event last Oct 30, 2009. I dont know him totally, just by the face. I called him the “geek” coz I wasn’t close to him nor other otaku guy. The first time I met him when he invited me to a grand eyeball of CDOtaku, that’s where it started.

A: How long have you two been cosplaying?

KR: Together, we cosplayed for 2 years, I think? But I started cosplaying since 2008.

RA: I’ve been cosplaying for 2 years but I started on 2009. Misa Amane was my First fail cosplay ever, I was informed from my close friend the day before the event.

KR: Nah Rem, don’t call it fail! We just didn’t get into the hobby that much yet. 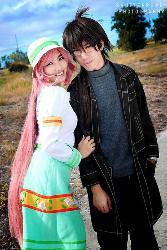 Hoshiko Hikari and Kazuo Ryuhei as Kobato and Fujimoto from Kobato

A: Did you cosplay as Anime couples? From which anime and what characters did you go as?

KR: Ah yes, we cosplayed certain characters together like Sakura and Syaoran from Tsubasa Reservior Chronicles and Kobato and Fujimoto from the anime Kobato.

RA: We first couple cosplayed the anime of Tsubasa Chronicles, Me as Sakura while Kazuo as Syaoran. Kobato and Fujimoto of course… All of these couple cosplays are inspired from CLAMP. It is because I love CLAMP animes ever since I watched Card Captor Sakura and he got captivated to love CLAMP because of me.

A: Was planning hard for couple cosplays?

RA: Of course! It’s very hard. We must both agree of which cosplay fits for us, especially when we have different interests; It conflicts us.

KR: Yeah but later on we’d agree on the anime and characters we like.

RA: that includes the expenses as well

KR: it’s fun to decide though, making estimations of costs and the complexity of costumes as well

A: But everything was worth it right?

KR: It was worth it. really worth it.

RA: Of course because our love became stronger! I fell more inlove with him! 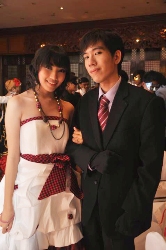 A: What’s the best thing about couple cosplays?

RA: The best thing about couple cosplay is the feelings for each other: we love each other, we love cosplay, and if we put it all together, It became a perfect formula for love.

RA: That’s the most important foundation for couple cosplays!

KR: Another fun thing about couple cosplays is that we are free to act out the characters together, and we can relate to the characters especially if they are characters who have a love for each other.

RA: Also, another thing we love about couple cosplay is when people feel very engaged in our cosplay and that shows that we fit together. I’m even happy to hear others screaming for us! Right, dear? 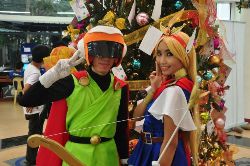 A: In one of your couple cosplays, have you presented a skit?

A: how did you two plan the scene?

KR: we cosplayed two attires for Tsubasa and so those are the ones with skits. Both of them are interpretative dances; Rem did the choreography .

A: Do you two plan to do more couple cosplays? if yes, from what anime or manga series?

KR: We have a few more couple cosplays, but it’s not necessary that it’s a love team, like Machina and Rem of Final Fantasy Type-O and then Digimon.

KR: and romeo and Juliet. 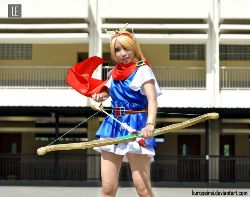 A: On the Xavier University Festival Days 2011, you two cosplayed as different characters. Did you help each other out on making the props?

RA: Chacha and Saiyanman are different, but we still helped each other. I made all of my props and with special thanks to Mark Dimaano for making the plain base of the bow, and the rest I put full details.

KR: We did our cosplays individually but planned together, giving each other tips.

KR: Rem did very well with her props as well.

RA: Kaz as well! So much more of the guns, armor and helmet! I’m proud of you dear!

A: Does jealousy strike when the opposite sex asks for photos?

RA: Omg, a bit? But if it’s cosplay, it’s nothing personal. As long as Kaz won’t give his number to anyone who asks.

KR: Same with you, and as long as no guys touch her.

A: When you two couple cosplay, how do you cut the costs and save money?

KR: In cosplaying, quality is everything and you don’t want to compromise quality for cheap materials. If you want to cosplay the best, you have to make sacrifices for it, especially with wigs and all. But what we do to cut cost is to find a seamstress that would cost us less, cloth that looks good, and as much as possible, use materials we can find easily for props to cut down costs.

RA: I’m very much particular with quality too. As long as we can find the materials that has a high quality to it but can also be affordable. I’m very much meticulous when it comes to this. 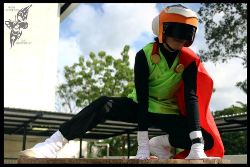 A: in terms of your respective costumes, which one is your favorite?

RA: That’s hard. If it’s couple cosplay, that will be Sakura from Tsubasa Chronicles. But if its individual, all of them are my favorite.

KR: I love all my cosplays, but in terms of impact, it would be my saiyanman costume because i was able to wear it to a christmas party for the kids in a relief center. The kids were able to recognize the character, and we all had fun playing. Though my costume is now unwearable (rough kids), I think it was all worth it for the kids.

A: What advice can you give to young otaku couples who are going to enter cosplay events for the first time as couples?

KR: For the guys part, be mindful of your girlfriend’s cosplay character: Be sure that no one will harass her. Stay with her always so you can keep watch over her. Also, guys need to understand that even though you are couple cosplaying, it is really not needed for the both of you to be in one photo. It is possible that others may ask for a photo of you or your girlfriend individually but just oblige. The keywords here are being together and being free at the same time. Don’t get jealous if your other half has more photographers going towards him/her, it’s not about the photos. The reason you cosplay together is to experience the hobby together, not to see who gets the most pictures. For girls, dont get totally misunderstood when girls might have fans of your boyfriend, and mind how many people love him other than you. Don’t get totally jealous just because he chats with other girls and don’t get totally misinterpreted when you see your boyfriend cling to a person in every picture, those are for the sake of FUN. JUST AVOID PERSONAL ISSUES.

RA: In my point of view, if you have a girlfriend/boyfriend to cosplay with you, GO FOR IT! I cant explain the feeling, but you get the kind of feeling that is really intense for a perfect couple. You will never forget this “feeling” after the event ends. Its really worth treasured for a lovely couple. Even if you dont have girlfriend or boyfriend, bestfriends, male to male and vice versa are also okay. You can sense of fun and improve social relationships with each other. Avoid personal issues when you go for couple cosplay because thats none of the audience’s business. Have fun, let people get to take picture of you, and show to them that both of you are sweet.

KR: That’s a hard question. There’s so many to choose from!

Cool interview – and luv these guys too. More cosplay interviews would be awesome 🙂

In I was expecting a question which seems like this:

Other than Cos-playing, what are your other hobbies that somehow still relates to being an Otaku or Anime??

and the answer that is running in my mind was YGO…