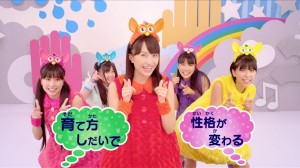 Japanese girl group, Momoiro Clover Z (ももいろクローバーZ), has a new member to their group in a form of a small robot that looks like a cross between a hamster and an owl with its own funny language. Enter Furby.

Those who are new to Furby should be delighted to know of how it works. Furby is the first ever successful robot to be available for the domestic market. It interacts with its owner and develops its own personality depending on how it is handled. It also comes in a multitued of colors, including the individual, solid bright colors donned by Momoiro Clover Z. We should also probably mention that Furby has its own language called Furbish.

Created by Dave Humpton and Caleb Chung, Furby first came out in 1998 during the American International Toy Fair. Since then, Furby was a massive hit with both children and adults. Furby was updated many times but soon lost its fame around 2007. Now, Furby is back and it has the team of Momoiro Clover Z to promote it.

The 2012 Furby now has LED eyes and has an Apple app to go with it. You can feed it through the said app or even translate what it’s saying.

With Furby under their wings, Momoiro Clover Z is now Momoiro Clo-Furby – a cosplay version of the group inspired by the toy. Their single entitled Wee-Tee-Wee-Tee, which is English for Sing Sing in Furbish, is released in order to promote Furby even further.

Check out the videos below to see if this team up would make you want to have your own Furby.