Published by SchoolGirlBlogger on July 18, 2012 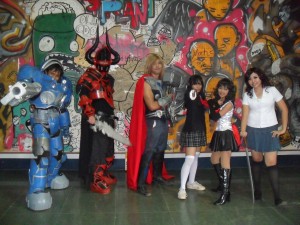 On July 6, 2012, the populace of Capitol University errupted in cheers and excited screaming as six costume clad figures performed on stage for their college assembly. With over 700 people present, both coming from the student body and the faculty and staff, the packed gym was all but screaming for the cosplayers who braved the stage. “Originally, there was no cosplay event planned; they (the assembly organizers) would just hire a mascot. I thought I could use this opportunity to promote cosplay and impress the president [of the university], so I told them instead of hiring a mascot why dont we ask cosplayers to join the event and increase morale? But I had to make a deal: if I could get positive feedback from the event, I would need help in order to set up a full cosplay event so that we can both have a win-win situation and fortunately, they agreed.” Robin James Cheshire, a computer science student of Capitol University who spearheaded the small event said in an online interview. 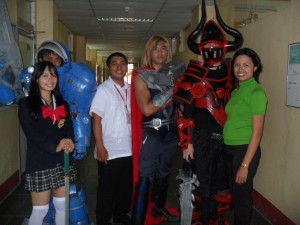 To the immense pleasure of Cheshire’s department as well as his small cosplay group, the mini cosplay event was a total success – to the extent that Atty. Casimiro B. Juarez, Jr., the president of Capitol University, praised and congratulated one of the cosplayers. “It was a very humbling experience, though I’ve been cosplaying in various schools in Cagayan de Oro for years now including Capitol University, this time the president of that school walked up to me, shook my hand and congratulated me on a well done cosplay. I was so nervous yet deeply honored that he actually approached me. I thanked him and told him right away that it was an honor and a privilege and if it was possible we could hold a legit cosplay event in CU and he said with a smile that we were more than welcome to. That experience will be one of my most memorable cosplays ever from now on.” Stephen Flores, who cosplayed Thor from The Avengers, said of his experience. 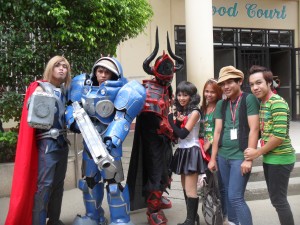 Although Cheshire still awaits for feedback on his event, it was clear that the whole of Capitol University was on their toes all because of the cosplay action. His group also hopes for more formal cosplay events to take place in Capitol University. “The president gave us the go signal to hold cosplay events in CU so I’d have to say there will be a bigger and better cosplay event in the future. I’ve already appointed Rob [Cheshire] and Elizabeth Ronolo as the official cosplay organizers and designers for any possible event to happen in CU and knowing them, they are already planning one as we speak.” Flores said.

Capitol University is a private academic institution located in Cagayan de Oro City, Philippines. Formerly known as Cagayan Capitol College, Capitol University was first founded in 1971 and is known for their successful number of nursing and education products.

The cosplayers in attendance are listed as follows: Thor from The Avengers, Sailor Saturn from Pretty Soldier Sailor Moon, Gogo Yubari from Kill Bill, Marine from StarCraft, Abyss Knight from Grand Chase and a random school girl.