Published by SchoolGirlBlogger on February 1, 2012 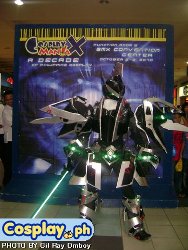 Xaga Rae is one cosplayer in Cagayan de Oro City, Philippines that has a burning passion for armored cosplay. Taking a few minutes off from his birthday party to answer quick questions, Xag lets his cheery personality loose.

Asgard: How did your interest in cosplay start?

Xaga: Well, it started because I was addicted to [online] games so I was inspired by the designs of ingame armors, especially Ragnarok.

A: What was your first armored cosplay and how long did it take for you to finish working on it?

X: My first armored cosplay was a Ranger Unit Accretia from RF Online. It wasn’t quite good at that time and it took me a week to make it.

X: Well, it was at Xavier University Festival Days a few years ago and yeah, it did because it was a first and very unusual costume with lights.

A: A costume with lights? How did you do it?

X: It’s not really total lights like what I made on my successing cosplays that really used technology. It was just a single light on my helmet as its eyes since I was cosplaying a mecha. 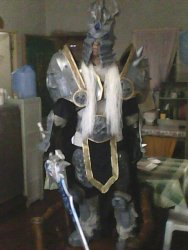 A: What materials do you usually use in making armors?

X: Rubber is the most essential part of cosplay armor and the add-on’s come after for the designs.

A: We all know that making cosplay armor is a tough job. Did you experience minor injuries while making your costumes?

X: That ALWAYS happens! Burnt fingers from strong adhesive, cuts on the skin, poked fingers from pins and all sorts of clumsiness.

A: Have you considered non-armored cosplay?

A: What characters? And why rarely?

A: That’s true. How much do you spend on your costumes?

A: Is that the total amount for all your cosplay costumes or just one?

A: How many armored characters have you cosplayed and which one is your favorite?

X: I think I have done 8 characters and my favorite is my second and biggest mecha. That was Melee Acretia, Power Core set from RF Online.

A: What character are you planning to cosplay in the future?

X: I still don’t know what to make first because there I have a quite a number of characters lined up that I want to cosplay.

A: And everything is still in armor?

A: What advice can you give to novice cosplay armor makers?

X: First you got to have patience because armors aren’t made with just a snap of a finger. It also needs a scientific basis because you’ll be wearing it and not a mannequin. 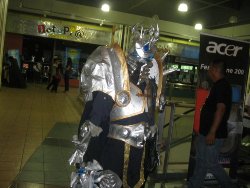 A: Do you have a favorite mecha anime?

X: I don’t really watch anime which is why I don’t have a favorite title but I am very much in love with video games!

A: Ok, so scratch that. What’s your favorite video game?

X: Any game as long as there are mechas in it! First it was RF Online. And then followed by Ragnarok and Bounty Hounds.

A: Is there any game you can recommend?

X: Try the latest online games by Level Up! games and Bounty Hounds!