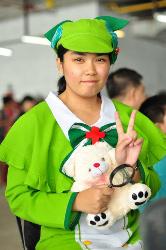 Anime and writing is the perfect combination for Margs Pangilinan. As a student of Mass Communications and the managing editor of their college publication, The Blue Sash, this otaku blogger hones her communication skills in both speaking and writing while unleashing her sharp creativity on cosplaying.

Asgards takes these two and puts them together to form an interview with this one-of-a-kind cosplayer.

Asgard: You must be our first female armor cosplayer interrogated. What attracted you to armored cosplay?

Margs: Well it’s a funny story really. It started around 2008. I was still a beginner with anything in the cosplay world. The first project that I had to make by hand was an ANBU mask from the Naruto series. I am not ashamed to say that I started out with materials such as Aluminum Foil and Tissue Paper. Later on, I got into cardboard then soon into using craft foam. It’s not really a matter of attraction. I think it’s the motivation of making something out of nothing at all. Siince then, I began to love making armor and props for cosplay more and more.

A: And why Alphonse Elric?

M: Alphonse would probably one of my memorable armored cosplays ever. Why? Because it was a dedication to my

younger brother. He was such a Full Metal Alchemist fanboy over the summer which made me rewatch the series. When I saw Alphonse Elric, I pointed on the TV Screen and said “I will try to make him.” I had a connection with Al as well: Loyal and having a soft spot for Cats. He started out as all cardboard + paper mache get up but then I started again from scratch and made him out of craft foam. I really did not aim for anything much. I had fun making him over the years. And it all started with brotherly love…

A: That is so sweet! Have you donned other armored cosplay aside from Alphonse?

M: So far, Alphonse was my biggest project. I did an OC Samurai Armor twice (I joined in one Fun Run Halloween event wearing one!). I also cosplayed as Gaikoz from the online game Grand Chase, and a Yaripon from the PSP Game Patapon. Aside from that, I mostly do prop making as well. I have made a lot and I lost count. The memorable ones that I had to make for friends were Lynn Minmay’s Microphone (Dimensional Fortress Macross), I also did the Mask and Sword for my Chikane Himemiya Cosplay(Kannazuki no Miko), I also did Len Kagamine (Vocaloid) headphones and CLAMP Saya’s sword (Blood-C) for a friend as well.

A: How long does it take for you to finish making your armor/props?

M: In the case of props, it usually goes on a one week scale depending on the details. My armor goes around in the scale of 3-4 months tops. Sometimes my Mass Communication and otaku life gets in the way so there’s a bit of delays here and there. I sometimes go into regular cosplay as well to give myself a rest from the crafting and such. 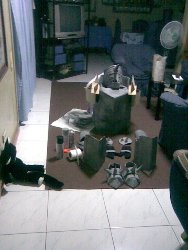 A: As a Mass Communications student, does being an otaku blogger help you out in a way?

M: This may sound crazy and odd to some but honestly, I personally would like to thank my Otakuism for making me love my MassComm course more and more. I mean, hey, think about it. We are living in a world where technology is everywhere and the internet has become a power medium for information, entertainment, and trends. Social Media is also taking the Mass Media world by storm. I think being an otaku blogger really helped me a lot to show people a different point of view of some things that people just misunderstand sometimes.

A: When you write your articles, do you put some criticism on some anime/manga titles you review?

M: My usual style of making anime and manga reviews is I first introduce the reader or give the reader a summary of the series just to give him a little synopsis. Then my general “talk” takes over. But I never look on one side alone, no. I look at both the positive and negative sides of the series. I will always make it my protocol to end a review in a balanced and clean unbiased manner.

A: Since you’re a cat lover, any plans of doing a cat girl in a future cosplay event?

M: I still have a lot of cosplay plans lined up as of the moment. But if ever given the time, yeah why not?

A: Does you fiance give you ideas on who you should cosplay next?

M: I usually give out the cosplay ideas. But sometimes, I seek his help for advice and motivation. I honestly would have not come this far in my cosplay and otaku life without his encouragement. 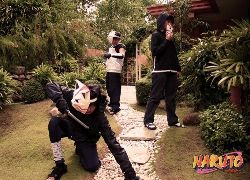 A: You do both armored and regular (non-armored) cosplay. Which do you think is better?

M: I actually love both! I love doing armors due to the crafting and creativity with your own two hands, and clothe cosplay due to the stylish and unique designs. Aside from my armored cosplays, I did a some clothe ones like Chikane Himemiya (Kannazuki no Miko), and Hercule “Elly” Barton from Tantei Opera Milky Holmes. By loving the two categories, it made me love cosplay more and I get to learn from the different advices and tips that other cosplayers share to me and to others.

M: I think the biggest achievement that I have so far in my cosplay life was not from the characters that I portrayed nor the big and small events that I joined in wearing the armor and the costumes. I think the biggest achievement that I did in cosplay was to inspire people. Prizes and fame was never on my list. I want to inspire people because the cosplayers and the otakus that I meet along the way made me a better person and I want to share that inspiration and motivation to other people. I hope that in the near future, there will be more people who will engage into the hobby and just have fun! 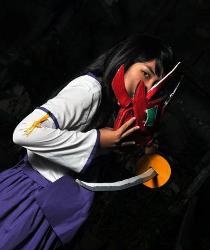 A: Any advice you can give to novice cosplayers?

M: First, Always start out small. Don’t jump into those hard complicated cosplays. We learn from experience along the way. Second, don’t be shy. Get out of your shells. Show them who you really are. Third, Have Fun!

A: Let’s play fill in the blanks. My cosplay stage name is…

A: My favorite anime is…