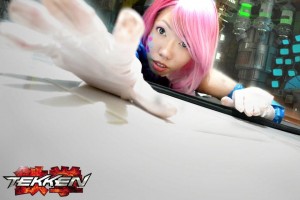 Celes as Alisa Bosconovitch from Tekken. Photo taken by コンピュータ天使.

Imagine reading this with the last scene of Tekken: Blood Vengeance (鉄拳 ブラッド・ベンジェンス) playing in your mind, where Ling Xiaoyu (リン・シャオユウ) and her newfound friend Alisa Bosconovitch (アリサ・ボスコノビッチ) were enjoying the afternoon away. Celes Ricolne is Alisa in the flesh – she is as sweet, bubbly and charming as the character she cosplayed during the General Santos leg of the Mindanao Cosplay Summit. Learn more about the Celes in this special Asgard Anime Cosplayer Interviews!

Asgard Anime: How did your cosplay story unfold?

Celes Ricolne: In 2011, it was only the second time a big cosplay event in my city was held. I decided to join as a one time thing. I didn’t think I’ll ever be cosplaying again after that event but surprisingly after that I got to wear my cosplay again when I got invited to do a photo shoot and the next thing I know I was already being encouraged to participate in the next cosplay events. So it’s like I officially started cosplaying after first that competition I joined. However, I’ve never mentioned this before, but prior to that event I have cosplayed during my school’s Halloween Event. I was so into Ragnarok Online so I went as an Acolyte, and my best friend went as my Sohee. I went to a Catholic school. Backstage I got a bit of a scolding from a nun for carrying a flail–a killing weapon (as she described it) and for wearing a cross emblem on my belt and my muffler. It was a bit traumatic. 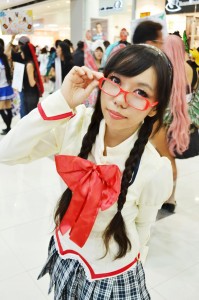 AA: Was there someone who influenced you to cosplay?

CR: Saya. She was my cosplay guru.

AA: How did your parents react when you opened to them about cosplay?

CR: They’re both fine with it and are supportive of me at present. At first my mother was okay with it but my father was a bit skeptical. I remember during my second competition, after I went up on stage to receive my prize, the moment I stepped off the stage my father seemed displeased and said, “You’re done? Ok, we’re going home. NOW,” So I wasn’t even able to take after event photos and talk with other cosplayers. It took a while for my father to appreciate it but I think it’s the crafting that brought us together. See, my father likes to build things too and there are times that he will occasionally poke his nose into what I’m building and point out what I’m doing wrong and I just let him. The next thing I know, I come home one day to see that he already went ahead and painted my whole prop for me. 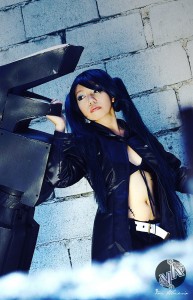 AA: Did cosplay eventually lead you to opening your own shop?

CR: Yes. Primarily because I wanted to help cosplayers here in my city make transactions with overseas suppliers and get better wigs than the crappy ones at the malls. Yumeiro KosuShop is something I consider part of my hobby. It’s not exactly my bread and butter and I don’t mind getting asked for help to promote other legit wig shops on occasion. In fact it’s another way of helping cosplayers.

AA: How many characters have you cosplayed and which one is your favorite?

CR: Still quite a few, actually. The next one would be my 10th. I don’t have a particular favorite. Each character I cosplay is unique in his/her/it’s own way I can’t bring myself to pick just one. I like them all, that’s why I cosplay them.

AA: Which character were you most known for?

CR: I honestly don’t know. I have no idea if people even notice or remember my cosplays. (laughs) Maybe Alisa Bosconovitch? What do you think, Ms. School Girl Blogger?

AA: You certainly blew the GenSan populace who witnessed your skit as Alisa. Do you have a dream cosplay? 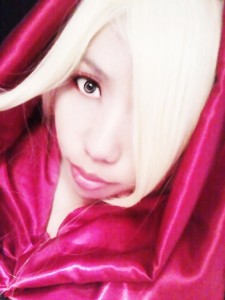 Celes as Argenta from Dragon Nest. Photo taken by コンピュータ天使.

AA: Did you cosplay Argenta from Dragon Nest as inspired by the game?

CR: Yes. I’ve been into Dragon Nest Online ever since closed beta and up until present my favorite NPC list is growing but Argenta still tops my list!

AA: How did you feel when you found your photo on Danny Choo’s Facebook page?

CR: A few days after Danny announced the new characters of Mirai Millenium. I asked him, “Hey Danny, may I get your permission to cosplay Shirasawa Chitose (白澤千歳)?” And he said sure. So after I did, I showed it to him thanked him. I wasn’t expecting him to share that at all. I was very scared and nervous! Because maybe his viewers might not like it. It was a Y.O.L.O. moment for me.

AA: Since you did a lot of cosplay photo shoots, were you curious as to how it would feel to be the one behind the camera?

CR: Yes, I was so curious that one time on a location photo shoot I tricked some of my friends into thinking I would be going there and cosplaying with them. They didn’t know I planned to be the photographer on that day…and they were my guinea pigs. 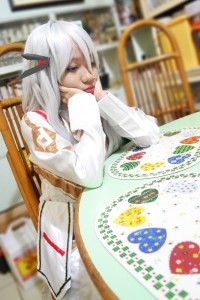 Celes as Shirasawa Chitose from Mirai Millenium. Photo by コンピュータ天使.

AA: What is Celes Ricolne like outside the cosplay world?

CR: Just your average wall flower who you wouldn’t even bother to take a second look at when you pass me by. I’m more a homebody and not really into late night partying, drinking, or staying out all night. I’m not into crowds and I’d rather be spending time with my family and close friends.

AA: What is the best lesson cosplay have ever taught you?

CR: Learn it, live it, love it, but most of all stay humble.

CR: I don’t have one. I have a lot of anime that I like and am an avid fan of but I don’t have an all time favorite….yet.

AA: What would be your message be to those who are hesitant to try cosplay?

CR: You’ll end up regretting more the fact that you didn’t even try it at least once in your life.

AA: Would you like some ice cream after this interview? 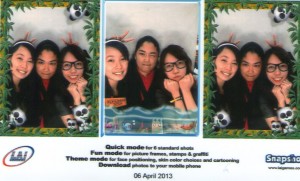 By request~ Celes with the Heartless Eponine and the School Girl Blogger. 🙂