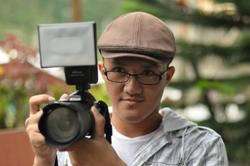 This week, Asgard takes a break from interviewing cosplayers and this time, interviewing the unsung heroes of cosplay events. Let’s face it, cosplayers make their huge breaks with photographs and they owe it to the people we know as “camekos”.

Although some camekos get bad raps, here’s a cameko who’s does things professionally. Enter Lanz Chester Enterina. Tall, smiling and a complete gentleman, Lanz is a cut above the rest.

Lanz: Let’s see. I think it was in 2009 when I started showing interest in otaku culture and especially cosplay, but back then it was difficult finding cosplayers in Iligan City until JR [Kazuo] introduced me to a halloween cosplay event in Cagayan De Oro in 2009 or 2010.

A: What was that the first cosplay event you have attended and what was your camera of choice then? 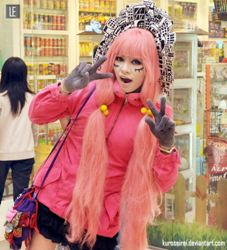 "During my trip to Davao for the MCS. This is Zhel, a well known cosplayer and the winner of the AFA 2011 in Singapore" -Lanz

A: Do you still remember the first photo you took on that cosplay event? How did you feel about it?

L: Yup, I did! It was a group photo of 4 cosplayers it was really nerve wracking at first because I didn’t have the guts to talk to them and ask for their photos due to extreme excitement.

A: Even as a cameko, have you considered cosplaying?

L: Actually I have already started working on my 1st costume.

A: Care to tell us what it is or would you prefer to keep it as a surprise?

A: Every photographer has a signature style. what’s yours?

L: Hmm, I’m not quite sure if I have a signature style but I do prefer less edited photos depending on what type of photography I’m taking. I’m more on the free range type, I like experimenting a lot of different things.

A: Speaking of editing, when does the need of editing photos arise?

L: For me I edit photos when the lighting is not right, colors look dull, when skin tone enhancement is needed, or when removing those unwanted stuff, and it depends if the photo is in need of extreme editing. 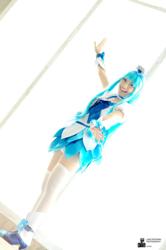 A: Did learning how to work Adobe Photoshop came with the birth of your hobby? or did you know how to tinker it beforehand?

L: I learned Photoshop before I even had my 1st DSLR. This is because of the spawned curiosity when I first laid my eyes on digital artistry.

A: When it comes to cosplay photography, does your ideal photograph coincide with the model’s pose?

L: Yup and this is why I love cosplay photography; you don’t have to tell what the model has to do. If that person really knows or loves that character that much, then it is my job to make it look good as possible. On the other hand, if the model has posing problems, then it is up to me think of a way to make the model feel comfortable by suggesting them a pose when I know the character that person is cosplaying. But if I’m not familiar with the character, then I will ask what signature pose and personality that character does and I will ask what angle of the photo should it be and ask if they like what they see or not. It’s like I’m trying my best to bring out the character they love.

A: Was there a particular cosplay photo shoot that you really enjoyed? 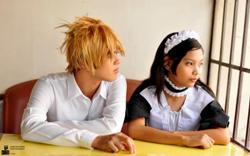 "My 1st cosplay photo shoot in Iligan City. Angelica as Misaki and Miguel as Usui" -Lanz

A: Have you photographed newbie cosplayers? How did you help them ease up their nerves?

L: Yup. It was still in Iligan City and like what I said in my last answer, I enjoyed it. The area we were having a photo shoot in was an indoor cafe and there were two costumers at that time, so it was really nerve wracking for the girl, mostly because it was her first cosplay and cosplay shoot at the same time. Before the shoot began, I tried to talking her into calming down, relax and smile, and said “if you can’t do those poses I will help suggest a pose, do those pose with the guy and etc”. The best part was during the shoot those two costumers actually help me to calm her down by saying: “Kalma lang, dai!” [Calm down, Miss!] and I didn’t know if it helped her or not.

A: How do you show your ownership for the photos you’ve posted on your deviantart without having to put on watermarks?

L: I won’t even bother if someone is claiming my cosplay photos since the cosplayer himself is already proof of the copyright. This year I’m gonna stop putting my watermarks in my cosplay photos, I’m only doing watermarks/copyrights in other fields of photography. For me cosplaying is different because I don’t own their costumes or that cosplayer. Sure there is that photograph ownership and promotion of your own work but I only put them in the description box. Putting my own name on a cosplay photo is kinda annoying because for me a cosplay photograph must be focused only on the cosplayer and the costume.

A: Camekos often have bad reps due to some pervy shots, what’s your take on that?

L: I’m a good guy. I’m a good cameko because I always take pictures of girls when they are aware of me on what I’m doing. If the girl is unaware and is being camera-harrassed, then its called pervert shots but there are guys like this who purposely do this even if the girl is aware. I guess it can’t be avoided there are perverts out there who enjoy taking pervert shots. 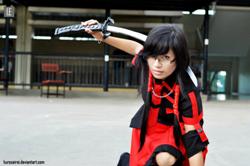 "Taken during the XU Festival days 2011. Cyd as Saya from Blood-C" -Lanz

A: What advice would you share to novice camekos?

L: Look at photos from other photographers get inspired by it. DON’T STEAL IT. Read some tips and techniques on photography and try to learn from other experienced photographers. Don’t stick to one type of photography; try other types as well.

A: Do you have an all time favorite anime?

L: Tough question! Let’s see… I have watch a lot animes and it’s really difficult to pick which one is my favorite, but I would say the Helsing OVA.