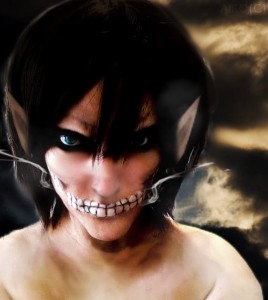 Shino Furusawa in her finished Attack on Titan make up. Photo taken from her Facebook. Photo credits belong to Furusawa and everyone behind her photo.

Here’s an Attack on Titan (進撃の巨人) cosplay make-up tutorial for all you Attack on Titan fans who think that cosplaying humans has become too mainstream. Created by Youtube user and true blue otaku and cosplayer, Shino Furusawa, this 24-minute long video teaches viewers how to look like a Titan with 120% accuracy.

The Titans (巨人) are the main antagonists of the Attack on Titan series. Standing from 3 to 15 meters tall, these massive monsters resemble male humans. Preying on humans seem to be an instinct these behemoths run on and they will stop at nothing, even the three Walls (ウォール) that protect the last of the human survivors to get what they want.

Shino Furusawa is known in real life as Tanya Panagia, an 18-year-old art student hailing from Italy. This make-up artist is also a wonderful pianist; her Youtube channel also features videos of her making music covers on her keyboard.

If you’re dying to learn how to become a Titan, check out Furusawa’s video below. Don’t forget to visit her other social networking sites listed below!