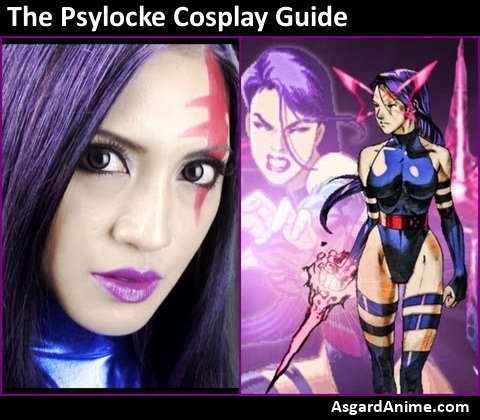 So you want to cosplay Psylocke from Marvel Universe’s X-Men?

Well, you’re in the right place.

Let’s jump right in and get started.

This is the ultimate bread and butter of all cosplayers. Your costume is just a costume unless if you bring life into your character.

It really pays to be a fan of the character you’re cosplaying. Do some serious research on what your character wears and more importantly, what your character’s personality is like. Mega huge bonus points if you pull this off so good that it makes fans give out squeals of delight.

Psylocke was born as Elizabeth Braddock. Nicknamed Betsy, Psylocke is the twin sister of Captain Britain and the younger sister of Jaime Braddock. 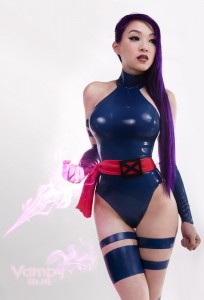 In Marvel history, Psylocke was created in 1976 by Chris Claremont and Herb Trimpe and has made her debut in the Captain Britain comic book series. She was integrated into the X-Men in 1986 in the second issue of New Mutants Annual. Kidnapped and brainwashed in the Mojoverse, Elizabeth was given bionic eyes as well as a new name — Psylocke.

When the New Mutants came to her rescue, she was taken under Magneto’s wing who filled in for Professor Charles Xavier in his absence in the Xavier’s School for Gifted Youngsters. Psylocke became an official member of the X-Men after she proved her worth when she single-handedly defeated Sabretooth and took precious information from his mind in the events of the Mutant Massacre using her psychic abilities.

To begin with, Psylocke has a complex personality. Her outward appearance gives one an air of compelling mystery. She exudes great sex appeal and yet at the same time, she’s someone you wouldn’t dare mess with.

Her personality is shaped according to her comic book storylines. In a nutshell, Psylocke is one of the most invaluable members of the X-Men. She aids her comrades in battle as well as saves them from danger. However, in the Crimson Dawn storyline where she was saved from death with the aid of the Crimson Dawn, Psylocke developed a cold personality and the mark of a red dagger can be seen over her left eye.

Psylocke is known primarily for her overwhelming psychic powers, specifically telekinesis and telepathy. With complete mastery over her powers, she projects weapons which give her an edge in combat – an added bonus to her martial arts prowess.

Her Psychic Knife is her signature psychic weapon which is often donned by Psylocke cosplayers. The Psychic Knife triggers the pain receptors of the victim without bringing physical damage to the person.

Psylocke is a kunoichi – a female ninja. A female ninja with psychic powers to be exact. Her default costume consists of a sleeveless blue or purple leotard with a turtle neck. She pairs this with a knee-high and a thigh-high boot. Plus elbow length blue or purple gloves.

The Psychic Knife is her weapon but she also wields a couple of swords called Katanas.

Preparing your costume is one of the best parts of cosplaying. In order for you to cosplay Psylocke, you will need a blue or purple leotard or swimsuit with a turtle neck.

If you can’t find one, grab the swimsuit or leotard and have it modified by a tailor or if you have a talent for sewing, you can do it yourself. Your boots, rings and gloves have to be of the same shade as your swimsuit. The strip of red cloth is easy.

The boots pose a great challenge. The cheapest method of getting this is to have boot covers, especially since one shoe is knee-high while the other is thigh-high. Not only will you get to use an old pair of shoes (which will definitely help you save money) but you’ll also boost up your creativity skills. Sarcasm-Hime has good boot cover guide which can be applied on any character including Psylocke.

If you’re not keen on going DIY, and just want to get everything online you can get get a pretty neat full Psylocke cosplay costume here on Amazon. You can tweak it to perfect it, and the price is not too bad either.

Psylocke is known for her long, glorious locks of purple hair. Straight, purple synthetic wigs that will fall to your waist will do.

But if you have plans such as giving it more volume, go for a wig that is heat resistant so it won’t melt when you use a hair iron. There are a lot of online shops available to cater your wig needs – such as this awesome one on Amazon.

If this is too expensive for you and you’ve grown your hair long for the past year or so, dye it the way Psylocke originally did (she was a former blonde). You can either go for a temporary dye which will come off after a good wash or have it permanent if you want an eye-catching ‘do. 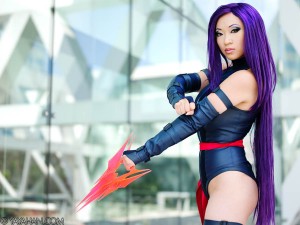 The Psychic Blade is optional but can certainly add up to the Psylocke look. If you want to have it, you can make one yourself using rubber or thick paper such as cardboard and spray paint.

Simply find a good reference of the Psychic Blade (preferably one that you can see in a lot of different angles) and draw the pattern on your chosen material. Cut it out and paint it.

If you will perform on stage, I personally would like to recommend going with a rubber sheet as it is sturdier than paper and it won’t seriously hurt anyone in stunts.

III. GET YOUR MAKE-UP READY

A lot of cosplayers would go the extra mile and have their brows match the color of their hair. One of the most popular ways to temporarily change your eyebrow color is to apply a non-toxic layer of glue stick on your eyebrows, and then apply a coat of your desired eyeshadow color with an angled brush.

Don’t worry this is perfectly safe and will come off after a good wash. In the case of Psylocke, you will need purple eyebrows. There are a lot of references available on the internet on how to color your eyebrows but if you’re not so sure what to do, watch this video below for an idea on how to do it.

To achieve the Psylocke makeup, some cosplayers choose to amp up the character’s sex appeal with dark, sexy eyes while some go with the dark hues of blue and purple to put more emphasis on Psylocke’s color scheme.

Both these options can be seen in the respective videos below. These Psylocke makeup guides are great to follow, especially if you’re new to cosplaying. Note that the Crimson Dawn tattoo over her left eye is optional. 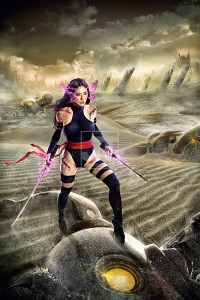 It’s cosplay day! You have made it this far and your sacrifice would be completely wasted if you don’t live the character for a day.

Mind your poses when fans ask for photos with you as Psylocke isn’t as merry and mischievous as Deadpool. If you are asked to go on stage and present, bring out the Psylocke within you!

You can watch gameplays of Psylocke in video games she is featured in such as Marvel: Avengers Alliance and Marvel: Ultimate Alliance and read up more about her in the Marvel Comic books. This will give you a good idea of how she moves.

We hope you have enjoyed this Psylocke cosplay tutorial – let us know in the comments below how you got on, or if you have any tips to add?