Asgard Cosplayer Insights: Are You A REAL Cosplayer?

Published by SchoolGirlBlogger on September 26, 2012 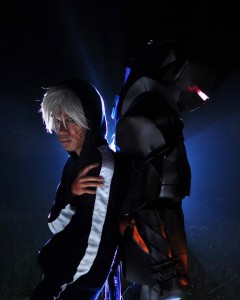 Kazuo Ryuhei as Matou Kariya and Minato Kai as Berserker from Fate/Zero.

Cosplayers are more than just people who join cosplay events and photoshoots. The fancy costumes they don are just skin deep and they don’t just do their character’s signature pose for the camera. Cosplayers breathe life into the characters of their choice. They bring spectators in a realm where anime, manga, video game and even comic book characters become a reality. Let Asgard show you what the true meaning of cosplay is through the eyes of these real deal cosplayers.

Question #1: Why do you cosplay and what is your goal as a cosplayer?

Everyone has a reason for taking up hobbies, including cosplay. Cosplayer Rui has responded with an answer a majority of cosplayers share. “Two BIG words: PASSION and ART. Honestly, I really didn’t see myself being a cosplayer. Before, I was just that typical anime and art enthusiast but when I got exposed to cosplay 2years ago, it really influenced and motivated me to do it [cosplay]! I cosplay because I want to experience being the character/person that I just don’t like, but LOVE. Being able to cosplay them is one hell of an experience! Because of cosplay, I was able to boost my confidence and I’ve also met wonderful new friends! It’s just so amazing that because of this art, I got to experience multiple positive changes in my life. And now, I’m still into it because of this burning passion for Cosplay.” 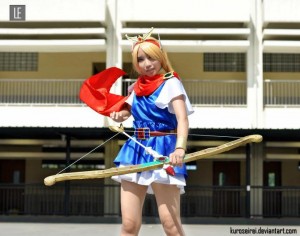 The vivacious Hoshiko Hikari welcomes young blood cosplayers with her goal as a cosplayer. “My goal in cosplay is to inspire others and to teach them when they are new because me and my boyfriend [Kazuo Ryuhei] are called Masayume, which means ‘Making dreams come true’. We are breaking the barriers of cosplay secrets and share it to everyone who wants to know and learn (but spoon feeding must be avoided too).”

Question #2: If cosplay is socially unacceptable, would you still cosplay and why? 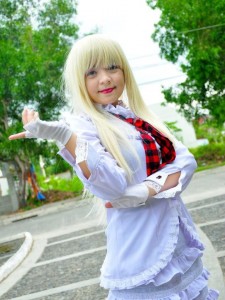 Knaix as Lili from Tekken 5

This is just one question that tests how serious cosplayers are in their craft. Some societies look down and frown upon cosplay but real cosplayers put their chins up, march on and even find something rewarding in the process. “Ever since I started cosplaying, I made awesome friends, some [whom] I treat as my second family. Cosplaying became a big part of my life so I wouldn’t care if cosplay is socially unacceptable today because it would still be acceptable to us and other fellow cosplayers around the world.” Chinx Bangquerigo shares.

“Regardless of social standards, cosplay remains a popular hobby.” Long time cosplayer Kazuo Ryuhei explains. “People who have shut themselves out of society use this as a way to express themselves for the characters they love so in this way, they are able to still be a part of a group that can understand them.”

A lot of cosplayers agree on cosplaying regardless of its acceptance in society as long as they are not hurting anybody. “I am not afraid to cosplay even if others won’t accept me coz I know I can’t please everyone. So if I am happy and I enjoy doing it (as long as I won’t hurt anyone) I will still continue cosplaying!” Armor cosplayer Robin Cheshire answered. 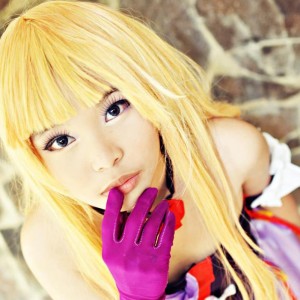 Veteran cosplayer TK shared his personal experience on the matter. “I started cosplaying back when it was still socially unacceptable –back to the time when people would laugh at you for being weird. It never really mattered to us as long as we’ve enjoyed it. After all, society was never hurt from a minority who did the said hobby. Most of us oldies before did labor gradually to make it palatable to society’s taste so yes I would still cosplay regardless of the social outlook of it.”

Kai Demonshard adds “Yes, I will still cosplay because they cannot stop me. They can put me down as much as they want but I will not bow down to their social norms.”

When asked this question, Eiri Senna has this to say: “YES! Why would I care? Society has absolutely NO RIGHT to question my hobbies, preferences and the like.”

Question #3: Sometimes there are incentives cosplayers get from cosplay. How do you stay level headed if the incentives go higher in terms of value? 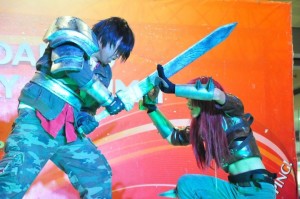 Often times, cosplayers are thrown into the limelight. The word “fame” would follow them suit. Even the word “fortune” comes in sometimes.“Quality has always been a competitive aspect in today’s cosplay, of course I too have the greed to get in the flow but reality check keeps it hindered at times. Chances may be slim to get a good start of a satisfying cosplay but those chances are the reason for me to thrive to get ideas and to think of solution. Heck if all else fail I can give it a smile that there’s a door called tomorrow to be open.” Slenderman cosplayer Mitsu said.

If the essence of cosplay is to have fun, Aya Ayanami shares her sentiments. “Well, it doesn’t really matter to me when the incentives go higher or lower. Personally, I really don’t like people whose heads get bigger because of cosplay. Cosplay is for fun and entertainment as well as a way to improve your creativity and skills. Incentives are a bonus, I can’t deny that. But to me, nothing matters more than having a great and fun time with everyone. What’s the point of incentives when you weren’t able to enjoy yourself?” 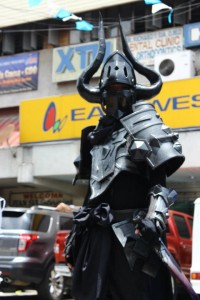 “Status, titles or awards are not really essential, don’t you think?” Touka Kisaragi, a cosplayer from General Santos, Philippines, puts it plainly. “I already get a lot out of just being able to cosplay and for me that in itself is already a reward. Also, there’s this realizing that at the end of the day, stripped-off from the costumes and freed from all that makeup, I come home and I’m just me – nothing special worth praising or giving special privilege to… I’d still be made to wash the dishes on occasion.”

Cosplayer Knaix agrees with Celes saying “It’s not the incentives I’m after, but the sense of accomplishment. It’s the process that matters.”

Despite his age, young cosplayer Minato Kai added this wisely: “Always remember, there will always be someone better than you. Fame will just go away and will hurt you most.”

* Touka Kisaragi is a pseudonym by cosplayer Celes Ricolne. You can find that I mentioned her on Knaix’s answer (see above).

* The photo of the black knight is Robin Cheshire as the Abyss Knight from Grand Chase.

is that confirmed pseudonym for Celes Ricolne?

Yes. I even talked to her about it.